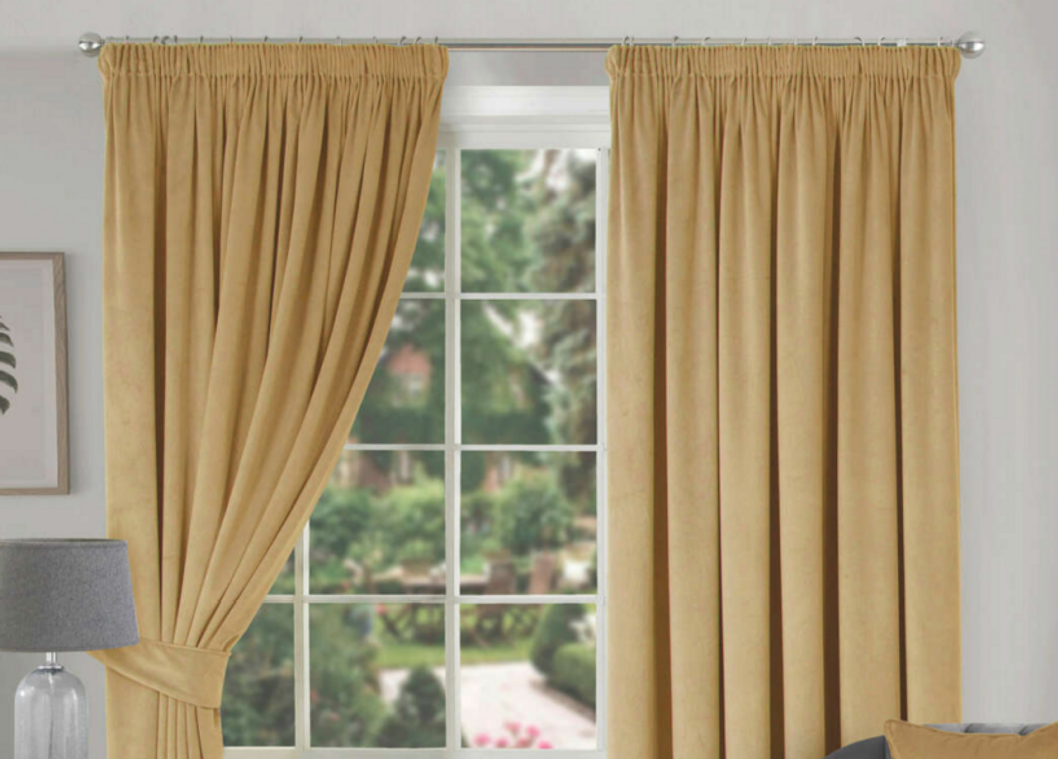 If you’re dressing your windows with curtains, you’ll need something to hang them from. Generally speaking there are two items that will do this: the curtain track, and the curtain pole.

But what’s the difference between curtain poles and tracks? And what should you use to hang your curtains?

How Do Curtain Tracks Work?

A curtain track is a long thin strip of either plastic or metal that sits right up against the wall.

This strip contains a channel, into which rolling carriages can slide along the length of the window. Attach the curtain to these carriages, and you can hang it in the desired position.

Tracks are less obtrusive than poles, as they offer a clean, low profile. Given that they use less material, they also tend to be more affordable than poles. Tracks can also be equipped with a corded mechanism, so the curtains can easily be pulled open and closed.

You’ll also need to decide whether or not you need a corded track. This is because you’ll need a way to attach your curtain to the track. Bear in mind that not all track packs will include them.

If you’re dressing a bay window, a lightweight track may well be ideal. You may even be able to bend a plastic track to get it to fit the contours of the recess. Just be sure that the track is advertised as flexible before you get to work. You can usually achieve a better look with the help of a made-to-measure curtain track (though this will command a higher price).

Of course, your curtain will need to cover the whole of the window, with enough room to spare on either side so that it can be moved entirely out of the way when drawn. Curtain tracks are easier to cut to size than poles, so you should be able to make adjustments later.

How to Cover Curtain Tracks

One of the downsides of a curtain track is the way it looks. While they don’t take up much space, many people deem them to be unattractive. One solution comes in the form of fabric-covered curtains tracks, but these aren’t the only type of curtain track cover. If your building allows, you might even have a concealed curtain track built into a purpose-made ceiling cavity.

How Do Curtain Poles Work?

A curtain pole lacks all of the complex mechanisms we’ve just mentioned – it’s pretty much a long stick onto which you can place eyelet curtains directly. If you have 3" taped curtains, you can hang these with hooks usually provided with the pole.

Curtain poles tend to have more visual appeal than tracks. They might be made from wood, or metal with elaborate swirls on either end.

Curtain poles are simpler devices than tracks, which means they’re far less likely to break. If you’re looking for an easy life in the long term, a curtain pole might be a better investment.

Looks aside, there are some practical considerations to bear in mind.

For one thing, you’ll need to be able to comfortably fit the rings around the rail. You don’t need to be precise about this – provided there’s a gap of around a centimetre or more, the hoops will be able to move freely from one end of the rail to the other. Metal curtain rods, being stronger than wooden rods, can be manufactured to be much thinner, which is worth bearing in mind.

As a general rule, metal curtain poles tend to suit modern, sleek interiors, while timber works better in more traditional interiors. Of course, you’ll want to match the look of your curtain pole to your curtains.

To keep things consistent, you might opt to buy brackets, hoops and finials (the decorative bits that sit on the end of the rod and keep the curtain in place) as part of a single kit. If you’d prefer to customise your curtains, however, you might instead decide to buy everything separately.

So What Should You Choose - Curtain Poles or Tracks?

Your decision on whether to fit curtain poles or tracks will depend largely on your personal preferences, and the furniture in your home. That said, there are a few rules of thumb worth following.

If you’d like to squeeze every last inch of space from a small room, then you might prefer the low profile of a track. More concerned with aesthetics? You’ll probably be better off choosing a curtain pole.

Whatever you choose, make sure to opt for something that’s strong enough to support your curtain. Each track and pole will come with recommended curtain weights. Weigh your entire curtain before hanging it using your bathroom scales (just stand on them while holding the curtains, and subtract your weight).

If you try to hang curtains on a pole or track that isn’t strong enough, sooner or later it will probably collapse – in which case you’ll need to invest in a new rail.